“Abra’s natural environment has engineered this incredible masterpiece right before my mind could ever imagine a waterfall that may look as grand as this. I found out that nature could surpass human creativity and imagination” – Edmaration #Townexplorer

​A Guide to Abra’s Kaparkan Falls in the Philippines

The first outsiders only set eyes on Kaparkan Falls in August 2012. Believe it or not even local villagers knew of their existence potential. They would pass by on a nearby trail going about their daily chores completely unaware that such beauty that lay just a few metres away in the lush green forest setting was a Paradise to others.

They were completely unaware of what the world outside wanted and was looking for.They knew that there was a waterfall, and that it was dry for seven months of the year, and to them it was the normal state of the falls. Kaparkan was just a place to rest up, drink water and carry on to there destination. They just couldn’t imagine that anyone in the outside world would find exceptional beauty there.

Seeing something in a photograph and seeing it in real life are completely different. Photographs will never be able to capture the full beauty of Nature. Photographs take a moment in time and freeze that moment forever.

Kaparkan Falls are alive and living. Mother Nature has shaped cascades of natural pools into the mountainside like water-filled rice terraces. Take a closer look around and you will see fallen trees and branches being swallowed up and converted into stone in our own lifetime. Kaparkan’s limestone terraces are continually evolving.

When i first heard about Kaparkan Falls, on my first visit to the Province of Abra  in March 2017 my first reaction was “OK, Lets Go!! ” But a few laughs later, it was suggested that I return in July or August after the rainy season has started. It is only then that Karpakan Falls is flowing and its beauty is exposed. Most of the year they are dry.

The Kaparkan season runs only from July till September, but if the rains happen to start early then the season could begin earlier in June and even be extended if the rains carry on until October. But i didn’t want to take any chances so made plans to head up to Abra towards the end of August.

As the Monster Jeepney called “Hi Lander” left the DPWH compound in Bangued I couldnt help but feel excited. There were ten of us toploading and as we all settled down for the ride, we soon got to know each other. The Jeepney passes through three municipalities on the way to Kaparkan – Tayum, Dolores and San Juan.

Keeping a watchful eye out for hanging obstacles such as branches of trees or electric cables that could cause us some serious damage if they caught us unawares, ( the joy of toploading) we enjoyed the changing scenery from our lofty position. After a couple of hours drive, the jeepney came to a halt as it was time to wrap chains around the tyres to help with traction along the deep mud track we were about to pass along.

Thirty minutes later we were on our way again.

Lurching left and right the Jeepney made its way along the furrows. We would meet locals walking to wherever they were going. The ones heading the same direction as us hopped onboard for a ride.Life up here in these remote hills must be hard.

We encountered teenagers out foraging for food, farmers tending their crops of corn and others just walking. The road is so narrow that when the Jeepney came face to face with a small herd of cows it could not pass, and the cows had to trot infront until the track opened up wide enough for us to pass.

After about 90 minutes we arrived at the jump off point where we would hike the rest of the way to Kaparkan Falls. A crowd of about fifty locals were waiting patiently under a tree for our impending arrival, and even before we had all alighted they were clambering on board for a ride to the other end of the mud track.

We survived the challenges of the trail to Kaparkan,.

A magical landscape that soothes a weary soul,

A serenade to lift us high, and a caressing lullaby,

Where to Stay in Bangued – Abrassi Hotel 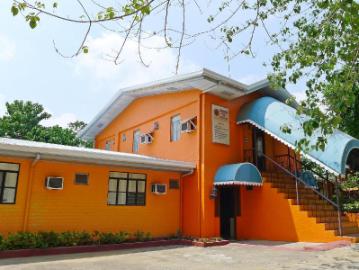 Kaparkan’s multi-terraced limestone wonderland stretches for about 500 metres from top to bottom. Lounge in one of its crystal clear pools or climb Kaparkan’s staircase. The limestone edges of the pools look slippery but are actually very safe to walk along barefoot.

Explore, enjoy and immerse yourself in the beauty and natural wonders of Kaparkan, but please do not vandalise, destroy or damage anything. This wonderland has been created slowly over millions of years.

Open and Find Out How to travel to Abra

How to travel to Abra from Manila

By Air
There are no airports in Abra. The closest airport is Laoag, three hours away by car.

How to get to Kaparkan Falls

Abramazing Tours have regular weekend trips to the Falls during the rainy season. You will need to book your place on one of the trucks.

The trucks leave from the Blu Gas Petrol Station in Tayum

There is plenty of parking space for those who arrive in vans.

If you arrive in Bangued by bus then take a tricycle to Blu Gas, Tayum to join the trip. Stay updated on the Abramazing Tours facebook page for any changes.

What to take to Kaparkan Falls

Here’s a short checklist of what you’ll need for the day.

Don’t forget that whatever you take make sure to bring it back with you.

ABRA - THE BEAUTY OF NATURE & HERITAGE

Did you like “A Guide to Kaparkan Falls” ?  If so then please share this page with your friends.

Audere Est Facere – Silverbackpacker.com – To Dare is To Do

Affiliate Disclaimer: Links on this website may be affiliate links that could result in us receiving compensation when you purchase a product or service from that link. You do not pay any extra fees for these items. This helps us to keep this website going. Thank you for your support.